The Seminar is entitled “100 years of observations from the Marine Biological Association” and Prof Hawkins promises to give some insight into the role of temperate reefs as tractable systems for testing ideas in ecology. Those working in the field may also be reminded while conducting experiments and formulating hypotheses; not to forget the older work (even if inconveniently published in French) and to have fun, “as it is a privilege to be a paid up rock pooler and experimental natural historian”.

Prof Hawkins comes to Adelaide fresh from the 10th International Temperate Reefs Symposium in Perth, where he delivered a plenary entitled “Looking back and looking forward: the role of surveys, experiments and importance of natural history in temperate reef ecology”. We hope you can join us to learn all about the kind of information that can be gleaned from reef systems and how this information could be used to shed light on issues such as climate change, biodiversity and the impact of shellfisheries.

The podcast from the seminar by Kathy Belov Can we save the Tasmanian devil from extinction? is now available.

The iconic Tasmanian devil is under threat. Not only does it face traditional conservation pressures, a devastating facial tumor is wiping out populations across Tasmania. The species is the focus of numerous conservation efforts and research, but can the devil be saved from extinction? Professor Katherine Belov, ARC Future Fellow and Professor of Comparative Genetics at the University of Sydney,  explores the fate of the Tasmanian devil. 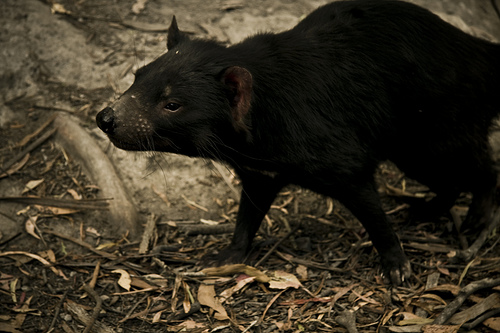 Katherine Belov is Professor of Comparative Genomics at the Faculty of Veterinary Science of the University of Sydney and contributing author of the 2012 Annual Review of Genomics and Human Genetics. In this seminar, Prof. Belov discusses:

The iconic Tasmanian devil is under threat. Not only does it face traditional conservation pressures, a devastating facial tumor is wiping out populations across Tasmania. The species is the focus of numerous conservation efforts and research, but can the devil be saved from extinction?

Professor Katherine Belov, ARC Future Fellow and Professor of Comparative Genetics at the University of Sydney,  will explore the fate of the Tasmanian devil in a lunchtime seminar.

Katherine Belov, Professor of Comparative Genomics at the Faculty of Veterinary Science of the University of Sydney and contributing author of the 2012 Annual Review of Genomics and Human Genetics, Prof. Belov will discuss the origins of the Devil Facial Tumor Disease (DFTD), a transmissible cancer that has already caused the disappearance of 85 percent of the species and could lead to its extinction in the wild within 25 years. She will talk about what is known of the tumor based on its genomics, why it is transmitted between animals without causing immune recognition in the devils, and what are the conservation efforts to save the species from extinction.

RSVP – Click here to register your attendance. By Friday 8 November.

The sustainability wave is well and truly upon us and many are now asking if there is still a first mover advantage that can justify efforts needed to overcome the lingering challenges and barriers. In this talk Charlie will draw on a series of books co-authored with The Natural Edge Project (including ‘Cents and Sustainability’ that was ranked the 5th top sustainability book in 2010 by Cambridge University), along with over a decade of industry and government action research, to highlight areas were such advantage exists for South Australia. Recently appointed as a member of the Club of Rome, and recipient of the University of Adelaide James McWha Award for Excellence in 2013 for his contribution to the field of sustainable development, Charlie has a great depth of understanding of the operational nature of sustainability and is committed to South Australia’s future.

“As an emerging international thought leader in sustainable development with over a decade of experience, a session with Charlie Hargroves should not be missed!” David Singleton, Chair, Infrastructure Sustainability Council of Australia

The presentation will be followed immediately by

This networking part of the event is focused on developing linkages with industry and government agencies in South Australia. A theme of the event will be to conceive possible projects for the ARC-Linkage 2014 round, along with other collaborative opportunities.

This session will be lightly facilitated by Charlie and Fiona Kerr to encourage you to meet new people that are passionate and active in the same area of sustainability that you are.

The ECIC is proud to provide refreshments for the Green Drinks and it will be held in the impressive foyer of the Nexus 10 Building on the corner of North Terrace and Pulteney Street.

Charlie is a Sustainable Development Fellow with the ECIC and specialises in carbon structural adjustment. After graduating from the University of Adelaide in 2000, and spending two years as a practicing civil/structural design engineer, Charlie co-founded ‘The Natural Edge Project’ (TNEP), an internationally recognised team of action research academics based at various universities across Australia including the University of Adelaide, Curtin University, QUT, and the ANU. Charlie has led the TNEP team to deliver five international books on sustainable development (selling over 80,000 copies in four languages) in collaboration with some of the world’s leaders in sustainability, such as Gro Brundtland, Ernst von Weisacker, Amory Lovins, Rajendra Pachauri, and Peter Newman. The first book won the Australian Banksia Award for Environmental Leadership, Education and Training in 2005, and the two most recent books were ranked among the ‘Top 40 Sustainability Books’ in the world in 2010 by the Cambridge Sustainability Leaders Program. Charlie is due to complete his PhD on carbon structural adjustment in early 2014, supervised by Professor Peter Newman

The Environment Institute Blog has moved!

Please see this post at the new blog here.

It’s National Water Week, and to celebrate we’re releasing the latest Water Wednesday podcast. Dr Bryson Bates was a Theme Leader for CSIRO’s Climate Adaptation Flagship from 2008 to 2013, and is an Adjunct Professor at the Department of Civil, Environmental and mining at the University of Adelaide.

He spoke at the Water Wednesday about climate change and flood risk.

Dr Bates, was the Director of CSIRO’s Climate Program from 2004 to 2006. He served as a Lead Author for the Second, Third and Fourth Assessment Reports of the Intergovernmental Panel on Climate Change (IPCC)  and a Convening Lead Author for the IPCC’s Technical Paper on WAter and Climate Change. Bryson has received a certificate of recognition for his contribution to the 2007 Nobel Peace Prize awarded jointly to the IPCC and Al Gore. Bryson is the Foundation Editor-in-Chief for the international journal Climate Risk Management and an Editor for the international journal  Climate Research. He is an invited member of several national and international committees. He was also a member of the Expert Advisory Board for the European Union’s WATer and global Change (WATCH) Project. His research interests include: hydroclimatic extremes; non-stationarity in hydroclimatic time series, downscaling numerical climate model simulations, and the effects of climate forcing on rivers.

The Environment Institute (University of Adelaide) are delighted to present a public seminar by Professor David Lodge, University of Notre Dame, Indiana. 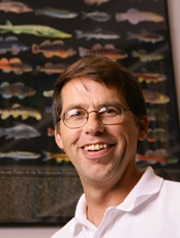 Professor Lodge is one of the world’s leading researchers working in global change biology and invasion ecology. With expertise in land-water links, invasive species, and environmental policy, his research critically examines how our activities impact, and continue to change, the habitats that provide us with drinking water, recreation and fisheries, and valuable biodiversity. Some of the key questions that Professor Lodge’s research addresses include:

In Australia, the threats to environmental resources and amenities are multiplying, putting pressure on our communities and economies. These pressures are predicted to accelerate with increasing human use of the landscape and limited water supplies, as well as the human-assisted movement of plant and animal species from one place to another. What are the risks to our health and wellbeing?

Come listen and learn from Professor Lodge as he shares his international insights on biological invasions and biosecurity risk.

Join us to hear from Professor Peter Ward,

When: 3pm, August 21, 2013.
Where: Mawson Lecture Theatre, the University of Adelaide
Cost: FREE

Peter D. Ward, Ph.D., is a paleontologist and professor in the Departments of Geology and Biology at the University of Washington in Seattle. He also serves as an adjunct professor of zoology and astronomy. His research specialties include the Cretaceous–Tertiary extinction event and mass extinctions generally. His books include the best-selling “Rare Earth: Why Complex Life Is Uncommon in the Universe” (co-author Donald Brownlee, 2000), “Under a Green Sky: Global Warming, the Mass Extinctions of the Past, and What They Can Tell Us About Our Future” (2007), and “The Medea Hypothesis: Is Life on Earth Ultimately Self-Destructive?” (2009).

Mass extinctions have been the subject of intense curiosity and study from the dawn of the discipline of Geology as a modern science.  The topic has informed (or clashed) with fundamental principles of Geology through its history, including Catastrophism, Uniformitarianism, and most recently a nascent “Neocatastrophism”.  In this talk Professor Peter Ward will communicate new information from  geobiological research by his group that pertains to this debate.

Peter’s TED talk has had over 280 000 views and his books are bestsellers. Don’t miss out to hear him in Adelaide.

The Water Research Centre  in conjuction with SA Water Knowledge Sharing Seminar present the latest “Four in 40″ forum on Thursday the 15th of August at 4pm at SA Water House Victoria Square. .

The forum is titled “New advances in treatment systems for water”.

Please ALL external people to SA Water please arrive by 3:45 to allow time for a short induction from the Concierge on the ground floor before access to the 3rd floor. Your name must be on the list at the Concierge desk for entry so please register on the link below.

The Australian Centre for Ancient DNA (ACAD) is pleased to announce Bioinformatics 13: Advanced Bioinformatics Workshop for Early Career Researchers, which will be based on the very successful Bioinformatics 2012 workshop. This workshop is an intensive 5 day hands-on training course tutored by international experts Rob Knight (the University of Colorado), Ludovic Orlando (The University of Copenhagen), Joe Pickrell (Harvard Medical School), and Stephen Bent (The University of Adelaide), utilising the latest available software for the analysis of Next Generation Sequencing (NGS) Genomics and Metagenomics data. The course combines seminars and extensive hands-on practicals involving the analysis of a range of model and empirical datasets, focusing on current approaches in field-leading groups. There will also be a limited opportunity to work on your own dataset with the tutors.

Early registration is essential as seating is limited to 30 places with very strong demand.

Pre-requisites: Delegates must be familiar with UNIX environments and basic command lines, and will require a basic knowledge of the technology and analytical tools of NGS. Some background experience in this field is required.